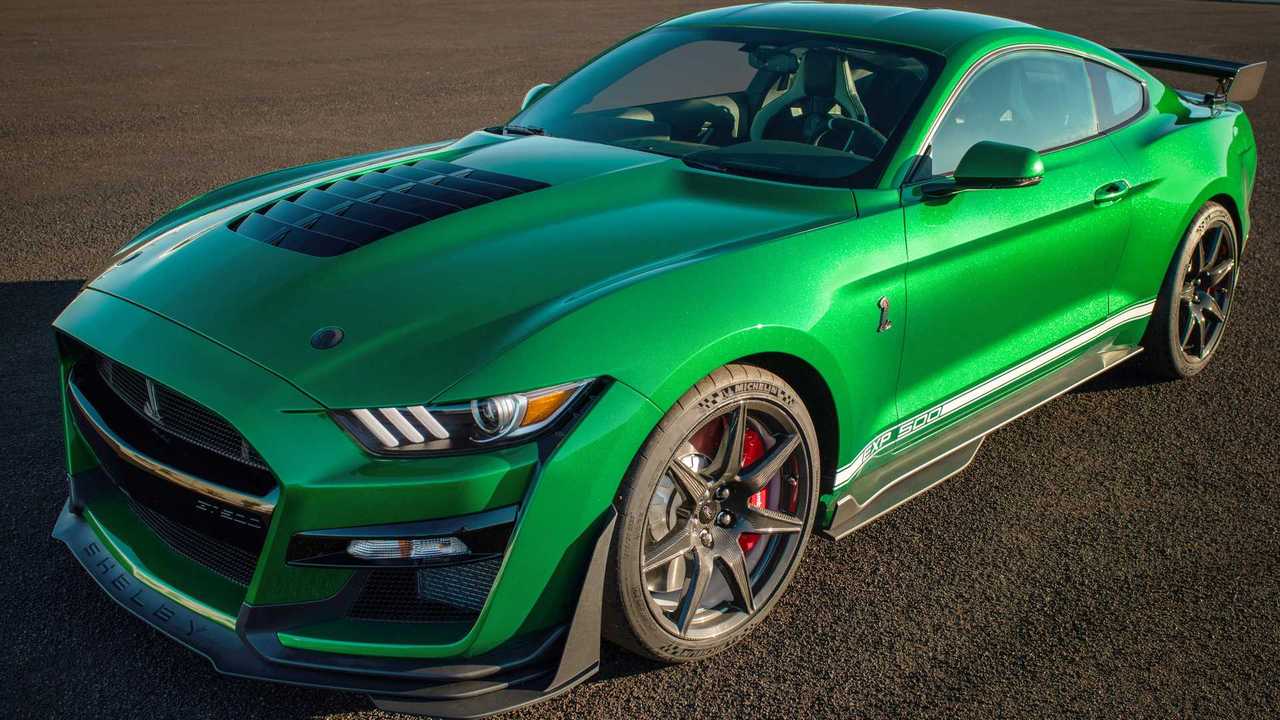 Craig Jackson and the team from the Ford Flat Rock Assembly Plant, with the 2020 Ford Shelby GT500 VIN 001 and its ancestor, the Green Hornet.

When MotorTrend’s Chris Walton took the 2020 Ford Mustang Shelby GT500 for a first drive, he was clearly impressed: “This isn’t the best Mustang ever, nor even the best Shelby ever. It’s one of the best sports cars in the world right now.”

Employees at Ford’s Flat Rock Assembly Plant in Michigan put it more simply: “This is the coolest car we have ever built!” They couldn’t contain their enthusiasm as the much-anticipated 2020 Ford Mustang Shelby GT500, bearing the special Shelby plate proclaiming it as CS0001, rolled off the line at the end of October, headed for the garage of Barrett-Jackson Chairman and CEO Craig Jackson.

Jackson himself was no less enthusiastic about his new acquisition. He and his wife Carolyn Jackson traveled to Flat Rock, Michigan, to watch the momentous event, having had the winning bid of $1.1 million for the car at the 2019 Barrett-Jackson Scottsdale Auction, with Edsel Ford II on hand to cheer on the bidding. The entire sale price went to JDRF, to help the organization create a world without type 1 diabetes.

To date, more than $6.8 million has been raised on the Barrett-Jackson auction block for this important cause, and while the Jacksons were at Flat Rock, they learned just how much Ford employees themselves are committed to helping JDRF. In 1998, employees, families and friends came together to create the Ford Global Action Team, led by National Manager Gael Sandoval. By bringing together tens of thousands of volunteers, the FGAT has combined passion and power to raise more than $3 million annually – over $70 million to date – to help eradicate type 1 diabetes.

“Carolyn and I are grateful to be a part of helping JDRF find a cure, and being there to take delivery of this exceptional car was incredibly special,” said Jackson. “Getting in there and watching all the hard work the Flat Rock team put into this car. I’m the one who pushed the button and fired it up; the first person to ever start it. It was pretty extraordinary.”

Jackson has long had a love for Shelbys; one of the prized examples in his collection is the legendary 1968 Shelby EXP500 prototype known as the Green Hornet, one of the rarest and most remarkable Mustangs of all time. Jackson’s vision was to have this new GT500 pay homage to the ’68, so he asked for it to be painted just like the original, with a Lime Green base topped with Candy Apple Green. “In making this request, I truly had no idea what an extraordinary undertaking it was, but BASF and the paint specialists at Penske went above and beyond to make that happen,” said Jackson. “The entire team at Ford went out of their way to help my dream become a reality, and I couldn’t be more grateful.”

Hand-painted on the car’s side is “EXP500” – exactly like the original Green Hornet, and the only Shelby to have this distinction. The vehicle is also the only one to have mirrors painted to match the body (the others will sport black mirrors).

Visitors to the 2020 Barrett-Jackson Scottsdale Auction will be able to see this “new Hornet,” as Jackson calls it, on display alongside the original Green Hornet and other noteworthy Shelbys from Jackson’s collection, including the just-restored “Little Red,” the historically significant 1967 Ford Shelby GT500 EXP Prototype found in a Texas field back in 2018. It will be the first time Little Red and Green Hornet will be displayed together, and a rare opportunity for guests to view Shelby history come to life before their very eyes.

For more images of the very first 2020 GT500 coming to life, check out the gallery below: