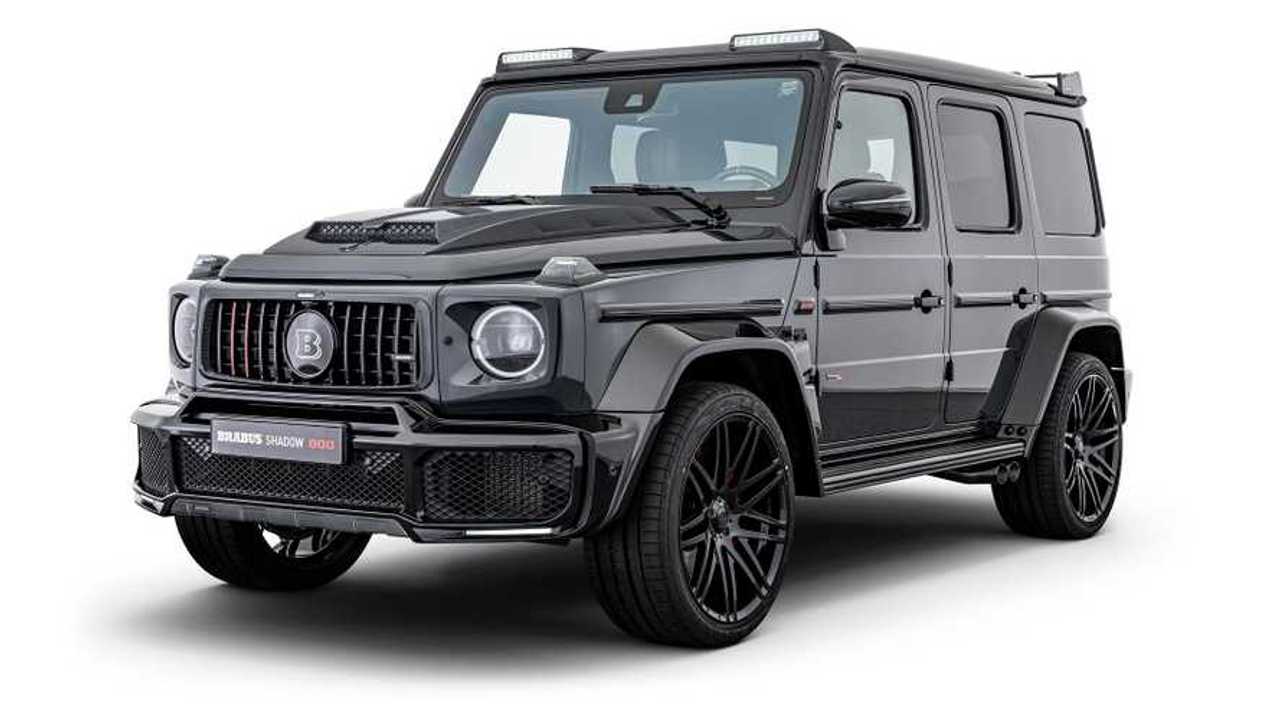 The first weekend in June 2019 provides the stage for two spectacular world premieres at two of Europe's most fascinating hot spots some 1,245 kilometers apart as the crow flies: The BRABUS BLACK OPS 800 celebrates its debut on Sylt Island in the North Sea as part of the BRABUS VIP SUMMER TOUR 2019. The BRABUS SHADOW 800 will be presented for the very first time at the Top Marques 2019 luxury trade fair in the principality of Monaco on the Mediterranean.

The basis for these two exclusive high-performance off-roaders, which are built in a strictly limited edition of just ten vehicles each, is the current Mercedes G 63 AMG.
At the heart of both supercars is the BRABUS 800 4.0-liter twin-turbo V8 engine with an output of 588 kW / 800 hp (789 bhp) and a peak torque of 1,000 Nm (737 lb-ft). With this engine under the hood, the two high-end vehicles deliver a performance on the road that is extremely high for an off-roader: These all- wheel-drive vehicles reach a speed of 100 km/h (62 mph) after just 4.1 seconds. The top speed is electronically limited to 240 km/h.

Both special models are equipped with the spectacular BRABUS WIDESTAR widebody and 23-inch BRABUS "Platinum Edition" hi-tech forged wheels. However, they stand apart not only with their special color scheme, but also with regard to the design of their exclusive BRABUS fine leather interiors.

Matching its name, the bodywork of the BRABUS BLACK OPS 800 presented on Sylt Island sports an all-black glossy paint finish. This is accompanied by subtle elements on the vehicle body and wheels painted red to match the interior. In addition, the black brake calipers are fitted with BRABUS logotypes likewise painted red. Moreover, the looks of the vehicle are characterized by the BRABUS WIDESTAR widebody, which not only lends the current G- Model a spectacular appearance, but also adds ten centimeters (4 in) in width to this exclusive off-roader. Apart from the fender flares, this bodywork modification also comprises new fasciae at the front and rear, which give the special model an even more dynamic design.

This also includes individual highlights such as the two red struts in the radiator grille or the design elements such as the hood scoop or the LED light unit above the windshield, which all sport a glossy naked-carbon finish.

The fender flares of this bodywork modification create space for the king-sized 11Jx23 forged BRABUS Monoblock F "BLACK PLATINUM Special Edition" alloys. These cross-spoke wheels are likewise painted high-gloss black to match their name and are fitted with a "BLACK PLATINUM" badge on the outer flange. The front wheels of the BRABUS BLACK OPS 800 special model were additionally given red pinstripes on the inside of two of the spokes and adorned with red BRABUS logotypes. The high-performance tires of size 305/35 R 23 are supplied by BRABUS technology partners Continental, Pirelli or YOKOHAMA.

One of the first things to catch the eye in the cockpit is the "BRABUS BLACK OPS 800 1 of 10” badge on the grab handle for the front passenger. In addition, the interior designers of the refinement specialist created a particularly exclusive BRABUS fine leather interior for this limited-edition model. To create a subtle contrast to the black outer skin, the interior is dominated by dark gray leather combined with black elements as well as red cover stitching
and piping.

However, the interior also demonstrates the great love of detail that characterizes the work of the BRABUS upholstery shop: This includes embossed BRABUS logos on the black horizontal stripes of the seats as well as the seat center sections, which sport perforations applied with pinpoint precision. In concert with the red backing underneath, they are another eye-catcher in the interior.

Further exclusive BRABUS elements in the interior are the aluminum pedals and door-lock pins as well as the stainless scuff plates with backlit BRABUS logo. Tailor-made naked- carbon faceplates take up the structure of the carbon bodywork components in the cockpit.

However, the BRABUS BLACK OPS 800 special model captivates not only with its thrilling looks and exclusive equipment features, but also with high performance in its purest form. The BRABUS 800 four-liter twin-turbo eight-cylinder engine with two high-performance turbochargers produces a peak output of 588 kW / 800 hp (789 bhp) at 6,600 rpm. Simultaneously, peak torque increases by 150 Nm (111 lb-ft): The engine puts an impressive 1,000 Nm (737 lb-ft) on tap at a low 3,600 rpm. BRABUS uses hi-tech lubricants from technology partner MOTUL for the entire powertrain.

The performance of the BRABUS BLACK OPS 800 on the road is accordingly outstanding: The BRABUS supercar sprints from rest to 100 km/h (62 mph) in just 4.1 seconds. The top speed is electronically limited to 240 km/h.

A thrilling exhaust note accompanies the superior performance. The BRABUS stainless sport exhaust, which on the special model is also an eye-catcher with its two black chromed exhaust tips exiting on either side of the vehicle, offers an electronic sound management thanks to its integrated actively controlled flap. It offers a choice between the subtle "Coming Home" mode and a decidedly sporty V8 sound.

The BRABUS SHADOW 800 will be presented at the Top Marques Monaco 2019 together with the latest exclusive boat from BRABUS, which also serves as inspiration for the exterior color scheme of the limited-edition model. The BRABUS 500 "Shadow OPS" Limited Edition "1 of 28" is a recreational watercraft with a top speed in excess of 50 knots (92.6 km/h/57.5 mph), which is produced in cooperation with Finnish manufacturer Axopar Boats.

Like this agile 30-foot boat, the new supercar sports a special ‘Gunmetal Gray’ paint finish. For contrast, key WIDESTAR components such as the fender flares and the fasciae at the front and rear are painted a glossy black.

Further important design elements on the BRABUS SHADOW 800 – as on the boat as well – are carefully placed BRABUS naked-carbon elements such as the radiator grille surround, the hood scoop and the "Power Beams" auxiliary LED light unit on the roof. Additional carbon elements are found on the rear end, such as the side sections of the BRABUS roof wing and the center section of the spare wheel cover with BRABUS logo.

The BRABUS SHADOW 800 captivates in the interior with individual extravagance representing the highest quality of workmanship as well: The exclusive BRABUS fine leather interior of this supercar sports an attractive combination of black, light gray and red leather. A prime example of the BRABUS upholsterers' quality of work is the center section of each seat. The 'Light Shadow Gray' leather there features square quilting applied with pinpoint precision. In concert with the perforations and the red backing underneath, this creates a discrete appearance. The BRABUS elements for the inner surfaces of the A-pillars are made

of Alcantara, which is elaborately finished with that same pattern applied with extreme precision. Embossed BRABUS logotypes and the red embroidered BRABUS logos on the head restraints document the noble lineage of this supercar.

The "1 of 10" label of the BRABUS SHADOW 800 Limited Edition is integrated into the dashboard-mounted grab handle for the front passenger of this supercar. Select naked- carbon elements in the interior represent the sporty touch of this high-end automobile.

In addition to the unusual looks, this BRABUS limited-edition supercar delivers high performance in its purest form. The BRABUS 800 V8 twin-turbo engine with a displacement of 3,982 cc (243 cu in) is fitted with two BRABUS high-performance turbochargers with larger compressor unit and modified core assembly with reinforced axial bearing. They produce a maximum boost pressure of 1.6 bar.

The BRABUS stainless sport exhaust optimizes the power delivery and thanks to integrated actively controlled flaps offers a wide range of exhaust notes from a throaty V8 sound in 'Sport' mode to a subtle whisper in "Coming Home" mode. This exhaust system is also a visual treat with its two black chromed exhaust tips exiting on the left and right in front of the rear wheels.